Plentiful Living with a Minimalist Approach to Life Continued

Plentiful Living with a Minimalist Approach to Life Continued

I first wrote about how our family decided to live a minimalist lifestyle by letting go of things and embracing experiences a while ago. You can read about how our Plentiful Living with a Minimalist Approach to Life began here. Since that time we continue to find ways to have less, to spend less, to do less, to need less. Living a simple life allows us to let go of complications and focus on what we love. 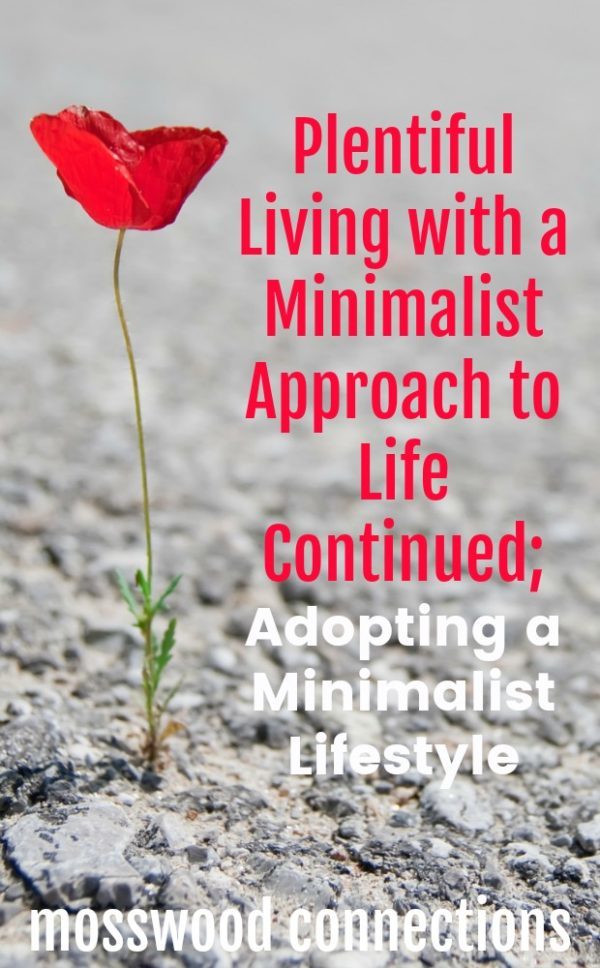 The Purge Continues on our Journey to a Minimalist Lifestyle

My son is still getting the hang of a Minimalist lifestyle. L really wanted to buy the new Kids Bop Cd. I am trying to not to bring things into the home without letting go of something so I suggested that he go through his books and choose some items to take to the book re-seller in downtown Campbell. They didn’t buy them all but he did sell 20 books and made $20.00. Almost enough for his CD. We donated the remaining books to the various free little libraries in our neighborhood. This is a win/win scenario as L gets to buy his CD and our house continues to lose weight.

Spending Time with Friends is Free-

It was a great day, we spent our day in the company of some of our favorite people and finished the night with an amazing meal prepared by Tom who will NEVER be a minimalist in the kitchen but we like that. Thanks, Tom, for a fantastic Michelin star worthy meal!
Tomorrow is the first day of my challenge to not buy anything other than consumables (like food, we have to eat.

) and I’m excited to see what I will discover about myself in the process of expanding our minimalist lifestyle.

Today I tackled the home office. I filled an entire laundry basket with unsolicited offers for credit cards, home loans, gym memberships etc…I wonder if there’s a way to get off marketing lists to avoid the waste of paper production, which I’m assuming (surely?) has a larger carbon footprint than what I imagine.

I did have a little bit of a hard time today when we stopped at Walgreens for some eye drops, and saw Christmas ornaments on sale 90%off! I picked them up, held them, and wrestled with ways to make it okay to buy them but, alas, I stuck to my goal and walked out of the store sans cheap ornaments. Truth is, we have more ornaments than we need and my favorites are the ones we made at home, which is like little time capsules that take me back to past Christmases. 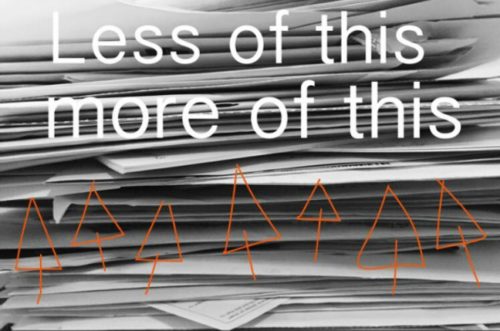 Too Many Obligations Don’t Fit With a Minimalist Lifestyle-

I haven’t had any trouble eliminating clutter from my home but my schedule is a wreck! It seems like I have so many obligations this week and hardly any time to relax. That certainly doesn’t mesh with a Minimalist lifestyle. I can’t do anything about the schedule this week but next week will have a very different pace. On a positive note, I haven’t made any nonessential purchases. Though I did order a delicious coffee alternative beverage from Amazon called Teeccino, but my morning cup is indeed essential.
Have a great night everyone

Earlier this week I tackled the home office and I was amazed by the amount of junk mail that we receive. We get a few of our bills electronically already but I have a few more that I need to switch over. I’m also planning to cancel all magazine subscriptions. It feels so good to get rid of all this paper clutter

If you want help getting started on going paperless check out this article: How to Go Paperless at Home.

Attacking and simplifying the craft supplies:

Before L was born I had a voracious addiction to scrapbooking and card making. I often bought my supplies when they were on sale and I always ended up with more than I could use. Once my son arrived, I didn’t have the time or the desire to scrapbook. My supplies ended up with the same fate as my China. Ignored and forgotten in a closet in the garage. The other night L and his friend L were making puppets. That’s when I decided that it was time to clean out my supplies and so I gave them free range to all of my expensive paper and embellishments. In the past, I would have weighed the cost of the paper against the intended use but now I could really care less. I can’t hang on to things indefinitely and watching L get creative with my craft hoard made letting go much easier.

There’s nothing minimalist about celebrating a half birthday but that’s just what we did this past Friday. For birthdays past I spent too much time planning the party and preparing for the event. It created so much stress for me and my family that after the party I often felt like I did when I ran a triathlon.
L started talking about his half birthday back in December (we celebrate half birthdays because he’s a summer baby and most of his friends travel during the summer months making attendance slim) he usually has a strong opinion about the theme of his party. Let’s see, we’ve had a superhero disco dance party, a parade party, a Mardi Gras Mambo party, etc… This year he had lots of ideas but never settled on one. In the past few weeks, he hadn’t much mentioned a party until 4 days before his half birthday. He wanted to have it at a very expensive children’s party center. Somehow this didn’t seem to fit well with our theme for the year so 3 days before his half birthday, I decided to plan a surprise picnic at one of his favorite knolls in the foothills. I was tempted to bake a cake and prepare picnic goodies but with so little time I decided instead to purchase a cake, strawberries, a bag of chips and a couple of cases of water. No fancy pulled pork sandwiches, no Jambalaya, no stress. We hung a few lanterns and a piñata from an oak tree and we pinned a pin the tail on the donkey poster on the trunk of one of the trees. We provided a few picnic blankets to sit on and that was all. No goody bags, no expensive party locale, and no gifts (although a few people broke the rules). It was a free-range party with very little structure. The kids had a great time running around and L said it was his best party yet. The total cost of the party was $110.00 which this day in age is awfully inexpensive.
I look forward to more low stress, free range, minimalist parties with L and his friends! 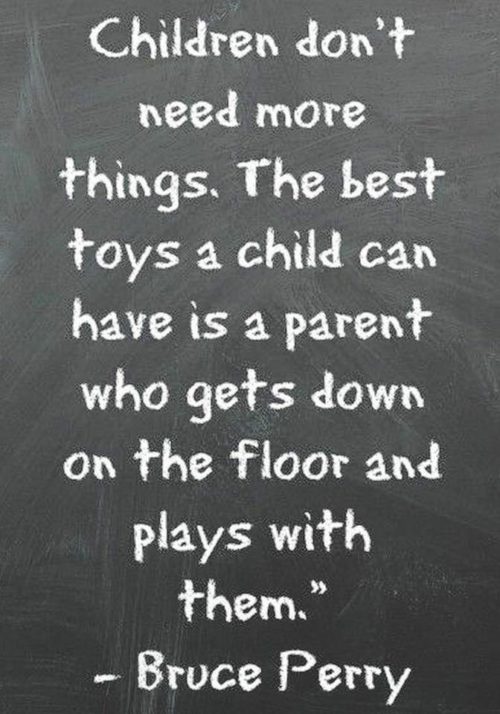 HOW MANY HOUSEHOLD CLEANERS DO WE REALLY NEED?

Am I the only one with a billion cleaners under the kitchen sink? I hate to throw it all out but I’m sure it’s all highly toxic. My goal for tomorrow is to replace the 777 bottles of cleaners with no more than 5 non-toxic, multipurpose homemade cleaners. I’ll be sure to share the formulas after I test them out.

HOW TO MINIMIZE WHILE SHARING:

I’m in love with all of the little free libraries that are sprinkled through my neighborhood. I also love the fruit that’s shared on the sidewalks but my favorite is the free trading post that one of my neighbors started a few years ago. Hooray for sharing. 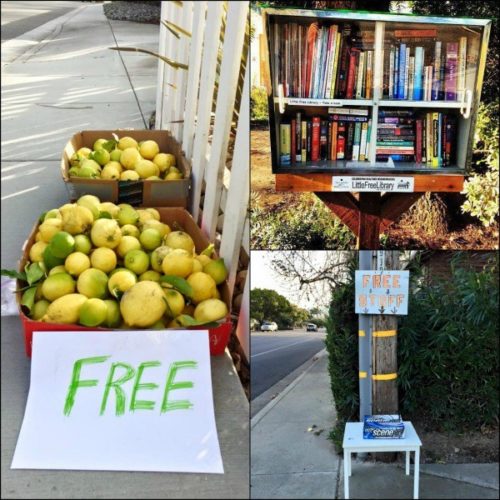 It’s been a while since my last update and I’ve had many moments of weakness but I’ve greatly reduced the amount of ‘stuff’ that I bring into the home. L has the next few days off of school so I’ve decided to break out all of the arts and crafts, (I had so much that there was still plenty), to see what he can create. Some of the stuff he used in today’s creations were things I bought 10 years ago! I’m glad he’s bringing new life to forgotten materials.

I haven’t forgotten my goal but life has a funny way of interfering with plans. I have a few hurdles in front of me that I need to deal with but I’ll be back at it in no time. I can proudly report that I can walk through my garage!!! And! I found a dress that I bought for NYE two years ago (it’s never been worn!!) that I thought I’d lost!

The challenge of reducing food packaging!

Have you ever noticed how much trash you generate while on vacation? It’s mind-boggling! We’ve been in Arizona for two days and we’ve already filled the trash can in our condo. The challenge for the rest of our time here is to eliminate buying food served on disposable plates/cups/cutlery or anything that comes in packaging.
Wish us luck!

After a minimalist summer full of experiences, not stuff, the purging continues…

It’s been a busy summer, but we are still keeping sight of our minimalist approach to life. This summer has been more about experiences and not about buying stuff.

L is back to school and so the purging resumes. Over the summer, the garage has become somewhat of a decluttering staging area. I realized, though, that I was at maximum capacity and I really did need to move the stuff out. My intentions were to haul most of it to shelters but today I decided that the surest way of moving it out was to put it on the curb with a big free sign. I had a little bit of a hard time letting go of some of my things as they were items I still considered useful and with some effort, I probably could have sold them. But alas, I put out a bunch of really nice yoga tops and bathing suits, party dresses, books galore etc…. All stuff that I could still use but who needs 10+ yoga tops or 25 party dresses. I mean really, I go to maybe 2 dressy parties a year! After my initial unease, I felt really good and even happy when I saw people excitedly taking the bags off my driveway. I put out a total of 5 waves of stuff. This is all that’s left and hopefully, it will be gone by this evening!

L loves to make videos and I’m always game for any flavor of silliness. This kind of fun is simple and costs nothing. We laughed so hard the night we made this movie that my abs actually hurt from all of the laughter. I’m looking forward to making lots more happy deposits into our family memory bank. 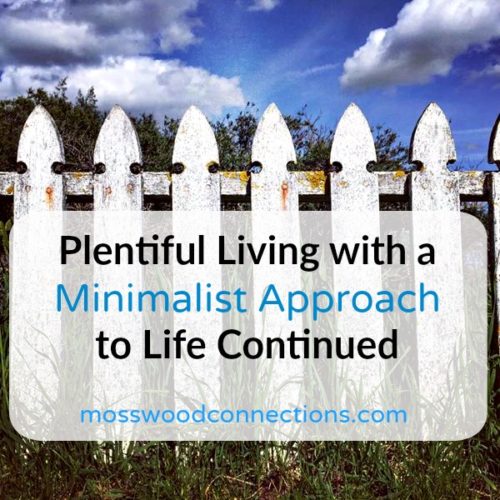